You may be required to show proof of id.

So, I say, which I think is the best way to start a sentence/paragraph/text/&c. So — I am writing a lot of translation notes at the moment. And I’m also translating a lot of things for which I do not need to write down notes, but sometimes I write down notes anyway. It’s a good way to think. I’m editing a story I wrote, and the best most circuitous and frustrating but resultative way to edit a text is to translate it back and forth and compare versions, at least for me. A good thing about this process is that the translation becomes much freer because I can change both source text and translation all the time. (Often this means that I am tempted to rewrite a sentence to avoid a translation problem, but I don’t do that unless the new sentence is prettier/better.) So why am I telling you this?

I’m having a Problem and I thought I’d type it all out to see if I can figure it out. I met a man the other day who spoke like a Shakespeare character in that nothing seemed to occur to him if he didn’t say it out loud. It was a bit sad perhaps. Anyway, in the xth draft — English — there is suddenly the word soundbite (usually spelt sound bite, I know, but I make the rules here). It was not in the previous draft. It poses a problem because that word does not exist in Swedish. I use it a fair amount but I tend just to say “sound bite,” you see. In many contexts you can replace it by phrasures like innehållslösa ord (contentless words), ord folk bara upprepar i medier (words people simply repeat in the media), or uttalanden (statements), but in this context what I want is the slightly more technical definition that sound editing, like the statement is part of a longer speech, a summation about which one can find out more were one so inclined. Nevermind that nowadays speeches are made up of soundbites entirely, like reading out a listicle speech. A speechsticle. Nevermind that soundbites have shrunk from over half a minute to just a few seconds over the long term of the faithful radio apparatus.

I need the word for how it means all of the things I’ve brought up and more. The reason I want this specific definition/connotation is simply that it’s part of my background, it is how I talk. The story will be much less me if I don’t find a way to connote all of this and row it home. So, the important aspects identified so far are: (1) emptiness, (2) partialness, (3) expression (of an opinion or fact, as somewhat a pose), and (4) connection to radio as a medium. I’m ignoring the connection to holding speeches, in fact not counting the politicality as an important aspect at all. One technique that one can use sometimes is to assign connotations to other parts of the sentence or paragraph, if one cannot stuff all the right connotations into a word. Think of it as you would a certain poem; a sonnet perhaps. Sometimes you need to move around ideas, swap ankle for wrist in one place and mouth for pharynx in another. To get the rhythm right without sacrificing the content of ideas. 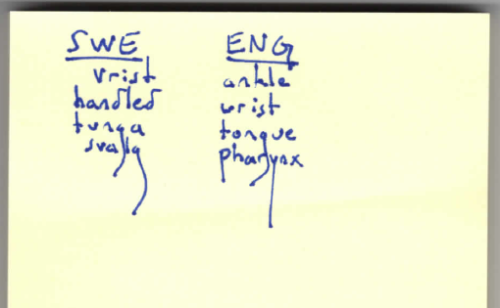 I guess this is the part where I tell you the whole sentence that the thing is in. Very well. The raw material of the xth draft is this:

He’d been thinking as he stood there in the aerobics hall – which was, surely, not the most masculine of ways to exercise anyway – of three different conversational topics and a few soundbites to chew through which could perhaps invite more comments and continued the conversation.

In my defence, it is not before the x+1st draft that I pay this close attention to the words on this level and care about grammar. But soft, what a relief. It seems that the verb “chew through” already connotes a kind of emptiness, and that should be easy enough to preserve in translation. Let us then say that the connection to radio as a medium is the most important thing to preserve, in which case we probably want a word like ljudklipp (sound clip?), which goes best with a verb like spela upp, connoting aspect (2) fairly well. We can add aspect (3) in another verb connected with the conversational topics brought up, by making sure the opinions-which-start-conversations do not need to be real things that this character actually believes. And so, I will leave you with the Swedish sentence. This thing will probably never reach print but I will be proud of it. Thank you for reading; it helps to pretend I’m talking to somebody.

Filed Under: On Writing, Translating, Writing
Tags: in which a word is vivisected : soundbite : swedish : translation

EXPRESS YOUR OPINIONS, ALL OF THEM Cancel reply

This site uses Akismet to reduce spam. Learn how your comment data is processed.