You may be required to show proof of id.

I found this book in a little bookshop in Hay-on-Wye, a receptionless town in Wales that is basically just one huge bookshop. If you’re ever in Wales you should visit it. Even the coffee shops sell books.

Anyway, this book is by one T. A. Pratt and it is called Spell Games. Judging by the price in American or Canadian dollars on the back, and the fact I’ve never seen any of the author’s other books anywhere, I’d say the books have never really been marketed in Europe. 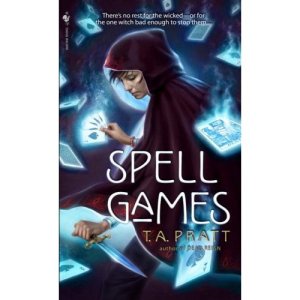 This is what the cover looks like. All the cards except the tarot Death cards are the ace of spades. Death isn’t a bad card per se in tarot, the way I understand it – it’s more like ‘change’. Presumably the ‘Change’ card is TERRIBLE for you.

I bought it solely for the first two words on the back blurb – BRAIN-EATING FUNGI – and I will always buy books that have that on the back blurb. The book delivered. It also delivered on a whole lot of other things until there were too many things to keep track of all that well, and it kept introducing things up until the very end. It’s a bit like the author’s not entirely confident in the weight of his own ideas and has to add more things to it all the time to keep the ball rolling. But the mycomancy – the mushroom magics, which differs from yet includes magic mushrooms – had an appropriate amount of screentime, so maybe he’s just aiming for the rollicking, yarny feel of a grand, threadful adventure.

He’s obviously devoted to the world he’s created, which is nice. Remarkable is also the fact that we have a female lead character who is strong, self-confident and not perfect. That is commendable. The world is also not one of those idyllic post-feminist worlds where everybody agrees everybody’s equal; it’s largely the real world but with some batshit magic thrown in. Compare uh, every work where straw feminists appear, I guess. No, the characters on the mostly-good-side occasionally snark about this, which is lovely.

Somewhere in the middle of the book, the character named ‘the messenger’ gets renamed ‘the courier’ for some reason. It’s not like they were used interchangeably, or that it changes because of his role (he’s a messenger at first, and then a sort of factotum-slave, and at the end he becomes a priest-slave, but he’s never a courier again). What is that all about?

I’m of the belief that one should be able to read a series out of sequence without losing too much, and reading this one was no problem. The book does not assume that the reader knows everybody and it introduces new characters with confidence, even if the characterization sometimes is a bit more tell than show. The book centers on the series’ protagonist Marla Mason, who is a sorcerer, and how her world is thrown out of whack by reuiniting with her con man brother, who doesn’t know about real magic. Of course, there are hijinks.

And at the end we get several climaxes and anticlimaxes one after another; some threads come together and some don’t, some flag away.

I think I’ll pick up something from Pratt in the future. Especially if there’s more mycomancy.

EXPRESS YOUR OPINIONS, ALL OF THEM Cancel reply

This site uses Akismet to reduce spam. Learn how your comment data is processed.